Habitat naturalization works, and we have Cordova Creek to show for it.

The creek in Rancho Cordova actually didn’t have a name, as far as we know, until the 1960s. That’s when it was lined with concrete and became known as Clifton Drain, named after the gentleman who initiated the lining project to protect area soils from erosion. However, as this area became part of the American River Parkway, the community became more aware of its potential and interested in revitalizing it. 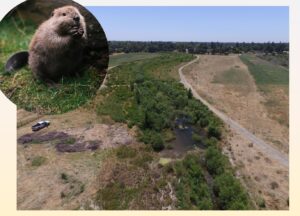 The project team removed all the concrete in the channel, used native cobbles to help slow down flows, and planted native riparian and upland vegetation, including willow trees.

Finished in 2017, the newly-named Cordova Creek was soon recognized with an award for “outstanding environmental stewardship” by the Sacramento Environmental Commission. And they weren’t the only ones to notice the project—beaver families soon moved into the area.

Beavers are nature’s original ecosystem engineers, and their dams can help bring deep incised channels back to life by backing up water and making it available for riparian trees and plants, which once established, serve as food and habitat for birds and other species.

Currently, there are four beaver dams and one lodge in Cordova Creek, which enrich 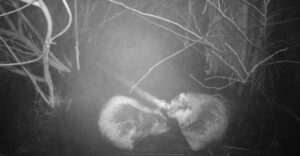 Adorable video of Cordova Creek’s beavers. Many thanks to wildlife photographer Carl Salmonsen for sharing his wildlife cam footage!

the naturalization project in several ways: 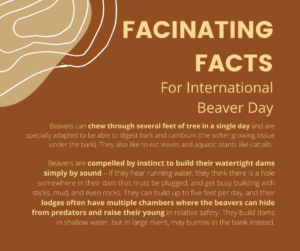 That said, the beaver dams present several challenges since the backed-up water can flood portions of the nearby interpretive trail and low-water crossing built in 2017. Also, since the beavers never stop building, flow patterns around the creek can change from one day to the next. Devices called “pond levelers” can help mitigate high-water impacts from beavers without affecting their health or habitat.

Today, what was once a concrete drainage now resembles a natural creek, with a tree canopy providing deep shade to keep the water cool, along with a wealth of other vegetation that attracts wildlife. The willows are huge, and deer often visit the creek. The creek is an amazing spot to step into the shade and enjoy the sound of the birds. The riparian plantings have done so well that it’s actually hard to get to the creek in a few places now. Although it has taken a few years, the native upland vegetation planted during the project is also established enough that the irrigation can be removed. 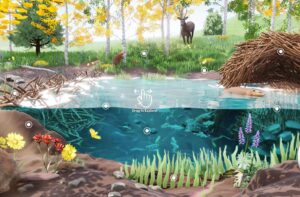 Check out this engaging interactive from the High Desert Museum’s experience “Dam It! Beavers and Us” that demonstrates how beavers can transform a riparian habitat into a thriving, lush spot teeming with wildlife.

River in which water flows year-round, providing vital refuge for many species even during hot summer and fall months. That’s because it benefits from treated groundwater discharged from the nearby Aerojet industrial facility.

Cordova Creek also has become a major asset for the community, which includes the adjoining Cordova Meadows neighborhood and Soil Born Farms, providing educational opportunities for Parkway visitors and local school groups to learn about the ecosystem, often led by the team at Soil Born Farms.

But the work isn’t done. Funding for the first project wasn’t sufficient to naturalize the final 400 feet of creek, where it connects with the American River. The Water Forum is currently working with a large stakeholder group to plan the next phase for this short, but complex portion of the creek.

Once complete, this formerly paved ditch will be connected to the Lower American River in a functional way, serving as a vital refuge area for wildlife, demonstrating how successful projects are the result of great (if sometimes unexpected) partnerships.