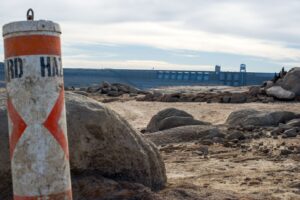 The Water Forum has been working closely with the U.S. Bureau of Reclamation to coordinate a response to drought conditions and reduce impacts to regional water supplies and the health of the Lower American River.

We recently welcomed Kristin White, Operations Manager for Reclamation’s Central Valley Project, to provide an update on drought conditions in California and across the Western United States at the Water Forum Drought Plenary. What she shared was both stark and sobering. It was a glimpse into the problems facing federal and state water managers during this extraordinarily challenging water year.

And she also offered a call to action—a role for all of us to play in reducing water use—as federal and state agencies continue their work to prepare for potentially devastating water supply conditions that could result from continued drought in 2022.

Here are some of the key points Kristin shared during her presentation.

Conditions in the American River Region

In the Sacramento region, 2021 is the third driest year on record for Folsom inflow and the center for major snowpack loss. “What hit us so hard this year was the loss of our snowpack,” Kristin said. The snowpack was deeper this winter than in the drought years of 2014-15 but only a fraction of its runoff made its way into creeks and rivers.

Kristin explained that in normal years, most reservoirs start with low storage at the beginning of the water year (which runs October 1-September 30), increase to a peak storage in the spring and then end low. This year, Folsom started low and will end even lower, noting that peak storage at Folsom this water year occurred on October 1, 2020.

On the other hand, Kristin noted that Folsom has a “very high refill potential,” and there’s a “decent chance” that Folsom will be able to recover to “decent storage” next year even if the weather remains dry into 2022.

This year has been the second driest year on record in the Sacramento-San Joaquin watersheds since the development of the Central Valley and State Water Projects, second only to 1977, Kristin said. Putting this into perspective: The state’s major reservoirs—Shasta, Oroville, Trinity, Folsom and New Melones—held 10 million acre feet of water (MAF) on October1, 2019. Those reservoirs are expected to collectively hold less than 4 MAF of water by October 1, 2021.

Shasta generally represents about a third of total storage for the statewide system. In 2021 Shasta inflow was the driest on record—about 200 thousand acre feet (TAF) worse than in 1977 and 250 TAF worse than in 2014. In addition, Oroville, which has a slower refill rate than Folsom, is at record low levels.

To help relieve pressure on Folsom, Oroville and Shasta this summer, Reclamation for the first time in history was able to draw upon New Melones to meet Delta outflow and water quality regulatory requirements. This was possible because new Melones started relatively high. However, storage levels are now less than we had going into 2014.

Disappearing Snowpack not Limited to California

Across the Western United States, drought conditions cover more than 93 percent of the land in seven Western states with nearly 59 percent of the area experiencing extreme or exceptional drought. This is the highest coverage this century and includes all of Arizona, California, Idaho, Montana, Oregon, Washington and most of Utah.

The Colorado Basin, which serves around 40 million people, is experiencing its 22nd year of drought and earlier this summer, the reservoirs hit their lowest levels since they were originally filled. The entire state of Idaho is in a moderate to exceptional drought, and March through June were among the driest on record. To make things worse, June and July have been among the hottest on record. Boise broke heat records in June beyond the two previous worst years of 1876 and 2015.

One key component shared by most of the large western water systems: relying on snowpack as the largest reservoir. The disappearing snowpack experienced in the American River watershed occurred in most of the basins, Kristin said. The Upper Colorado Basin, for example, saw around average snowpack with only 26 percent of average runoff.

“We Need Everyone to Help”

With minimal storage going into winter, continued dry weather into 2022 would be “devastating,” Kristin said. On July 8, 2021, Governor Newsom signed an Executive Order calling on all Californians to voluntarily reduce their water use by 15 percent compared to 2020 levels. Both Reclamation and the California Department of Water Resources are working on emergency planning but will need help from all Californians to conserve the limited water supplies that are available. “We will not be able to get through a dry 2022 alone—we just won’t have the storage,” she said. “We will need everyone, all of California, to step up and help prepare for what could be a devastating year.”

Levi works closely with Water Forum stakeholders and other federal, state, and local agencies; water and power users; the environmental community; and stakeholders to deliver efficient and equitable water solutions. The Water Forum team looks forward to continuing our work together!