September 30th will mark the end of the current water year, and it was a wild ride!

It all started with a roar on October 24, 2021, when Sacramento saw its wettest single day ever, recording 5.44 inches of rainfall. The subsequent runoff over the following week added close to 100,000 acre-feet to Folsom Reservoir storage.

November 2021 was relatively dry. Then December 2021 ended up being another wet month. In fact, the Central Sierra Snow Laboratory on Donner Summit set a new snowfall record in December 2021. In the first few weeks of January 2022, Reclamation was making releases from Folsom Reservoir to preserve flood control capacity. Unfortunately, this precipitation missed the northern Sacramento Valley, and Shasta Reservoir missed out on most of the runoff.

But then it all came to a halt. The January-through-March 2022 period had the lowest precipitation on record for Sacramento and the Sierra Nevada region as a whole. These three months are normally the wettest of the year, so this was a big blow to water supply. The result was another drought year for the state, although the picture for the American River Basin ended up being about average thanks to some favorable storm tracks. So, while Folsom Reservoir reached near-average levels in the summer months of 2022, other major reservoirs in the state fell to near-record low storage levels.

Fast forward to September 2022, and we saw a brutal heat wave that lasted more than a week. Sacramento even notched a new all-time high-temperature record on September 6th at 116 degrees. That was not only the hottest September day the city has seen (beating the previous record for the month by a full 7 degrees) but the hottest day in Sacramento’s recorded history, period.

September 6th also marked the beginning of the Mosquito Fire, which erupted that evening near Oxbow Reservoir in the Tahoe National Forest, and would grow to threaten the infrastructure and water supplies for the Placer County Water Agency.

It’s been an off-the-chart’s year for weather.

The extreme and disparate precipitation patterns across the state created extra challenges for already stressed systems (and water managers). While trying to balance the varying needs for the available water supplies across the municipal, agricultural, and environmental demands, water managers have also been looking for solutions outside the typical management toolbox. For example, agricultural growers in the Sacramento Valley, who are typically first in line for federal Central Valley Project water in the Sacramento River, saw their entitlements reduced to less than 20 percent, the lowest allocation in history. This reduction was an effort to meet environmental demands within the Sacramento River and in the Delta.

Riverine temperatures are an important management target when considering environmental 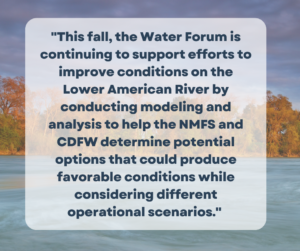 needs. October and November conditions in the American River often make it difficult to provide quality water temperatures for fall-run Chinook Salmon due to continuing warm days and seasonal rains not yet beginning.  This fall, the Water Forum is continuing to support efforts to improve conditions on the Lower American River by conducting modeling and analysis to help the National Marine Fisheries Service and California Department of Fish and Wildlife determine potential options that could produce favorable conditions while considering different operational scenarios.

Also, let’s not forget the role of conservation in keeping our rivers flowing. Every household is being asked to reduce water use by 15 percent to keep California thriving. It’s important to all do our part to encourage local residents and businesses to use less water.

Unfortunately, this past water year—and the swings from intense highs to lows—is just another case study demonstrating the impacts of climate change. Those huge oscillations between record-breaking dry and record-breaking precipitation make it incredibly hard to do the kind of seasonal water planning that needs to be done.

There is still a high level of uncertainty about what the 2022-2023 Water Year will bring. The National Weather Service Climate Prediction Center forecasts a 54 percent chance of La Niña conditions for January-through-March 2023, which would mean a third-straight La Niña winter and potentially another dry year. But it’s still a coin toss: Sacramento and the American River Basin can go either way, depending on seasonal variability. In our area, La Niña sometimes produces wet winters.

Don’t throw out your umbrella yet.

Ashlee Casey is a Senior Engineer at the Water Forum.