California has just concluded the driest January-February period in recorded history. The March 1 survey of the Sierra Nevada snowpack, key to water supplies across much of the state, reflects the trend as well, showing the snow water content at 62 percent of average for the date.

We at the Water Forum are hoping for a “Miracle March” that brings in above-average precipitation to reverse this trend. But we are also prepared for the reality that missing out on all that moisture in January and February—normally the wettest months of the year—likely means we will face a third consecutive drought year ahead.

As we discussed in our last blog about “weather whiplash,” early storms in October and December delivered 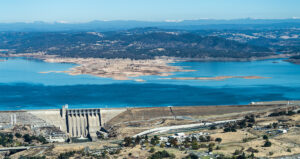 lots of rain and snow to the central part of the state. That means the American River watershed and Folsom Reservoir, which serve the Sacramento region, are in slightly better shape than the rest of the state. The Central Sierra snowpack stands at 65 percent of average—whereas the Northern Sierra is currently at 57 percent.

Folsom Reservoir is currently about as full as it’s allowed to be at this time of year, given flood-storage requirements present during winter. As of March 2, it stood at 106 percent of historical average capacity for this time of year—a much better position than the significantly larger Shasta and Oroville Reservoirs, which are near historic low storage levels.

Looking ahead, it currently seems likely that Folsom Reservoir—operated by the U.S. Bureau of Reclamation—will be able to end the calendar year with about 300,000 acre-feet of stored water. That’s a better outlook than last year at this time.

However, because of low storage elsewhere in the state, Reclamation may need to more heavily rely on Folsom Reservoir to serve other areas of the state that normally rely on Shasta and Oroville, and to satisfy water quality requirements in the Sacramento-San Joaquin Delta.

The Water Forum is already watching this unfolding picture very carefully. We look forward to continuing our partnership with Reclamation as they manage Folsom to support our local water quality needs in the American River and ensure wildlife, like our fall-run Chinook salmon, remain in good shape all year long.

Could we get a Miracle March? A long-range forecast by the Climate Prediction Center at the National Weather Service indicates an increased likelihood for wet conditions across the northern quarter of the state during March. If that benefits Shasta Reservoir, it could significantly relieve pressure on Folsom Reservoir and the American River.

Also, a storm moving our way this week brings a bit of hope. Through Friday, the Sacramento region could see a half-inch of rain, while the Sierra Nevada could see as much as a foot of snow above 4,000 feet.

So, while we remain hopeful, Water Forum members are also staying focused on addressing climate change and severe conditions projected over the long term. Dry periods like this one are expected to become more frequent and to last longer in our region as climate change worsens. Rain or no rain, we must also prepare for another drought year and continue doing our part to conserve water.