The Water Forum and its members maintained a strong focus on water operations and temperature management as we moved through the drought this year. In weekly cross-caucus meetings we poured over the latest projections, debated the merits of actions, and learned how to read buzz graphs and temperature modeling results. One long-standing member of the Water Forum, Ron Stork, Friends of the River, said that we might as well be getting college credit for a water operations and hydrology course.

But that’s just one half of the story. Water Forum members are also focused on how the low flows, high water temperatures, and extreme heat have impacted the health of steelhead trout and fall-run Chinook salmon (salmonids) this year. While Reclamation worked hard to maintain viable flow rates and temperatures during the long hot summer, well, we anticipated that it was going to be a hard year for fish to survive, much less reproduce and thrive.

But how bad were the conditions for juvenile steelhead that stayed in the river over the summer? Were there any cool spots for them to hide? Did adult Chinook return in early fall? For any of the fish that were present, were conditions tolerable?

Here’s what we learned …

Traditional snorkel surveys and seining surveys did not yield sufficient information about conditions to reach conclusions about the presence of salmonids. California Department of Fish and Wildlife was restricted in the amount and types of surveys because of the extreme conditions, and hours spent in the river did not result in significant information.

Cramer Fish Sciences-Genidaqs Laboratory, a Water Forum consultant, deployed a newer monitoring process, known as an environmental DNA (eDNA) survey, to confirm if salmonids were present in the river.  By collecting and filtering water samples Genidaqs can detect and analyze eDNA for specific fish species. The eDNA sampling was conducted at numerous locations throughout the river and was augmented with underwater video monitoring to provide visual cues to locate and identify fish.

These initial results indicate that the early arriving Chinook are finding poor water quality and temperature conditions when returning to the American River. And in these same conditions, steelhead are hard to find. The figure below shows that Cramer Fish Sciences-Genidaqs found relatively higher concentrations of Chinook eDNA compared to steelhead (O. mykiss) eDNA. This was also consistent with video documentation and field observations, and typical Chinook immigration and spawning behavior in the LAR. 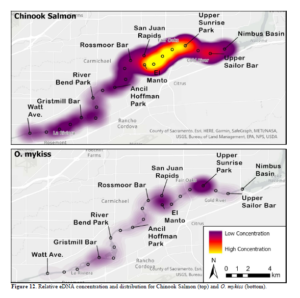 There were at least two small areas of temperature refuge at the mouths of Cordova and Buffalo creeks where the streams created better water quality and water that was 1-2°C cooler than ambient river conditions immediately upstream this summer. The Water Forum is actively pursuing funding to study how these creek confluences could provide refuge during future drought periods and under climate change.

These eDNA data are intended to complement ongoing monitoring and modeling efforts on the LAR to support both short-term flow decisions and long-term adaptive management. And while this is the first time the Water Forum has utilized an eDNA survey, it will likely not be the last time. In future years these surveys, when done at regular intervals over longer periods of time, could help us understand more about relative abundance and use of habitat.

We will have additional data to share early next year as populations continue to be monitored by CDFW, including pre-spawn mortality estimates for Chinook and spawning estimates based on redd (salmon nest) counts and carcass surveys. And as we work with State and Federal agencies to synthesize results from these monitoring actions, the result will be making use of poor conditions this year to adjust and improve management actions should dry conditions persist next year and in the future.

Learn more about conditions for fish this year here.

Read more about the details of the eDNA study here.