Here at the Water Forum, we are deeply saddened by the recent news that Jonas Minton has passed away. Our first full-time executive director, Jonas was a vital guiding hand in our work and left a huge imprint on many aspects of California water policy. He died June 22, 2022, due to a heart condition at the age of 73.

Jonas worked for the California Department of Water Resources starting in 1978, and rose to become a deputy director from 2000 to 2004, where he was responsible for divisions of Planning, Local Assistance, Dam Safety, Water Conservation, and Flood Management. Among other accomplishments, he served on the team that secured federal Wild and Scenic River protection in 1981 for more than 1,200 miles of California rivers.

Jonas helped shape the Water Forum in its formative stages and then served as executive director from 1995 to 2000. Susan Sherry, who guided the negotiations that created the Water Forum while at the Center for Collaborative Policy at Sacramento State University, recalled Jonas’s value as a guiding hand during those tense, early days.

“He was able to bring all these adversarial parties together, because he really believed in dialogue & seeking common ground,” she said. “So people trusted him even though they knew he was this activist. He did not put his thumb on the scale at all.” 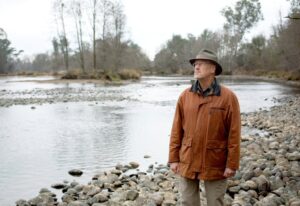 After retiring from DWR in 2004, he served as senior water policy advisor at the Planning and Conservation League until his death. In that capacity, he was a tireless advocate for the state’s rivers and for the Sacramento-San Joaquin Delta. His work helped lead to the removal of San Clemente Dam on the Carmel River in 2015. He also led the effort for a comprehensive statewide flood management package, which became law in 2007. More recently, he convened water law and policy experts to develop 11 detailed proposals on water rights, climate change, drought and water justice, a number of which are now before the California legislature.

Jonas was a generous friend who spent countless hours mentoring young people, recruiting volunteers and encouraging others with his relentless optimism. He also expressed his love for the water as an expert kayaker and rafter who enjoyed sharing the paddling life with others.

“He used to tell me that when he was on the river, it was spiritual for him,” Sherry said.

Jonas is survived by his wife of 42 years, Julie Carrasco-Minton, as well as numerous sisters, brothers-in-law, nieces and nephews. A celebration of his life is being planned for September. In the meantime, friends and colleagues are invited to make donations in his honor to Friends of the River, the Sacramento Food Bank or the American Heart Association.