When the Water Forum Agreement was officially signed 20 years ago, the occasion marked an unprecedented show of regional cooperation. For years, interests representing business, the environment, water suppliers and others had sparred over the water needs of people vs. the environment of the lower American River. This tension was prompted by a growing population, competing water supply and environmental needs and steadily declining groundwater levels.

“Environmentalists feared the American River would be drawn down to a trickle. Water managers wondered how they’d get customers to pay for new pipes and pumps necessary to increase reliability to keep faucets flowing in the next century,” wrote then-Sacramento Bee reporter Nancy Vogel.

To address these challenges, the City and County of Sacramento launched the Water Forum negotiations in 1993. Slowly, over the next seven years and thousands of hours of meetings, stakeholders negotiated a new plan that would bring cohesion to an uncoordinated approach to water supplies and environmental stewardship on the lower American River.

Ultimately, 40 different agencies—from the City and County of Sacramento to the Friends of the River to the Sacramento Metro Chamber—signed the agreement on April 24, 2000, marking the launch of the Water Forum’s real-world test.

Twenty years later, Water Forum members have made significant progress toward meeting the co-equal goals of providing a reliable and safe water supply for the Sacramento region’s long-term growth and economic health and preserving the ﬁshery, wildlife, recreational and aesthetic values of the lower American River. And, now, they are examining how the Water Forum Agreement can continue to serve the Sacramento region in the coming decades and a future with climate change.

A Long-Lasting Model for Collaboration

Over the years, the Water Forum has demonstrated time and again how diverse stakeholders can work together to develop lasting and holistic solutions for nurturing the river. During California’s recent drought emergency, for example, as water levels in Folsom Reservoir and the lower American River dwindled to historic lows, the Water Forum convened its Dry Year Conference.

Working together through the Dry Year Conference, Water Forum members developed emergency flow strategies to minimize harm to salmon and steelhead during the drought’s driest days and discussed plans for reducing demand on the river by shifting to using more groundwater and increasing conservation. The conference also provided a venue for water providers to identify potential interties that could help neighboring water agencies share drought-limited water supplies to meet municipal health and safety needs.

It’s easy for water stakeholders to get along when water is abundant, but in times of drought we are tested, and the Water Forum has helped us time and again pass that test.

Water Forum Executive Director Tom Gohring recently chatted with Cody Robinson of Bonneville Radio about the Water Forum’s 20-year history and role in serving as a referee and neutral party among diverse interests that might otherwise meet in the courtroom rather than through the Water Forum. Tom’s interview originally aired April 26, 2020 on Sports 1140 (KHTK-AM), Mix 96 (KMYX-FM), New Country 105.1 (KNCI-FM), Now 100.5 (KZZO-FM).

The Water Forum’s approach to meeting the co-equal goals has been grounded in cutting-edge science. After two decades, no other entity knows the lower American River—the Sacramento region’s crown jewel—like the Water Forum does.

Water Forum studies have produced detailed underwater maps of the lower American River to identify ideal locations for enhancing habitat that also avoid impacting flood safety. These studies have also revealed data on lower American River fish lifecycles, including spawning and rearing, adaptation and roaming. Identifying how long it takes salmon to use a new restoration site after construction and how long each site is utilized has been critically important to helping fisheries. The overall tracking of how the Water Forum’s restoration work benefits fish; and more.

And, step-by-step adaptive management over the years has helped the Water Forum hone in on the exact conditions needed for salmon restoration, providing details about the right depth for gravel placement, flow, rock size and other parameters.

For the past two decades, the Water Forum has been studying and refining guidelines for a flow standard for the lower American River that would provide enough cold water to nurture salmon and steelhead while also improving the reliability of water supplies for people. The Water Forum’s research has demonstrated that proper flows and cold water are the foundation to fish survival. Temperature, in particular, is considered to be the greatest stressor to species survival.

The Water Forum’s Flow Management Standard (FMS), first implemented in 2006, uses the best available science to set targets for minimum river flows and cold water storage at Folsom Reservoir. The Water Forum modified the FMS based upon real-world experience during the drought and is now working with federal and state agencies that manage Folsom Reservoir and the state’s waterways to encourage their adoption of the Modified Flow Management Standard (MFMS).

In addition to developing a new flow standard, the Water Forum also has been successfully working to restore and improve habitat for fish in the lower American River. The Water Forum leverages funding from local cities and water providers, Sacramento County, Sacramento Municipal Utility District, and state and federal agencies to create protected places for Chinook and steelhead to reproduce and rear their young.

Over the past decade, agencies have invested more than $7 million to create over 30 acres of spawning beds and 1.2 miles of side channels, which are prime rearing zones. Most recently, the Water Forum completed a major habitat restoration project on the lower American River at Sailor Bar designed to create ideal conditions for salmon and steelhead to spawn and rear their young. Partnering with federal, state and local agencies, Water Forum teams restored river habitat with stunning results: After counting zero salmon nests (redds) in 2018, the restoration site teemed with more than 1,600 redds after the project.

Reducing Reliance on the River

Finally, Water Forum stakeholders are working to protect the lower American River by reducing our reliance on the river for water supplies by increasing residential water efficiency and shifting to groundwater during dry times to leave more water in the river for fish and wildlife. Water use in the Sacramento region has remained steady over the past decade even as the area’s population has increased.

This year, as the Water Forum celebrates its 20th anniversary, stakeholders are embarking on a new strategic planning process to consider lessons learned over the past two decades and where the Water Forum should go from here, particularly in a future with climate change. The Water Forum Agreement is a living document—envisioned to adapt with changing conditions—yet ever focused on meeting the co-equal goals through collaboration. 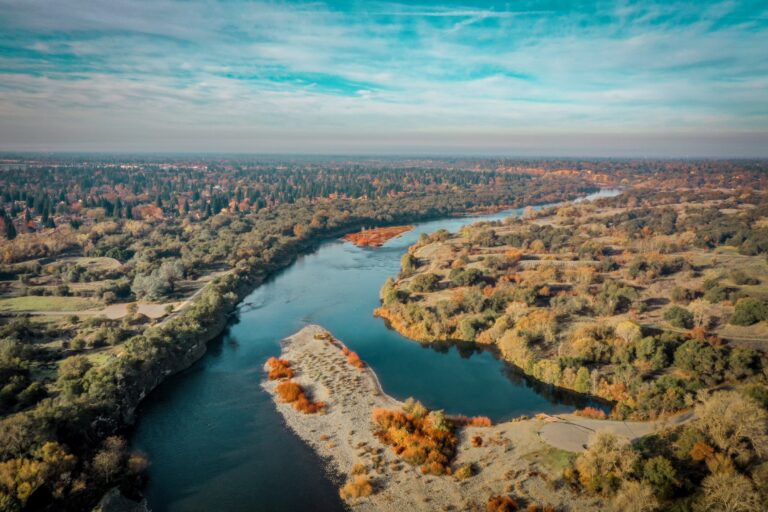