Last week, the State Water Resources Control Board received presentations from the directors at State and Federal agencies focused on the unwelcome new challenge of planning for a worse-case water year, which starts on Friday, October 1st. The presentations echoed messages that Water Forum members recently heard from Reclamation’s Kristin White, that conditions are historically dry not only in California but across the Western United States.

The core message was sobering: prepare for the worst, hope for the best. Each director emphasized that the joint strategy is a risk-management approach to assessing impacts and weighing options to secure California’s water supplies. With a strong focus on planning for another dry year, they outlined a suite of options to ensure that basic health and safety needs are met next year. These include coordinated use of reservoirs and mandatory conservation requirements in the near future. There was also a strong emphasis on local actions and the solid partnership and close coordination between State and Federal agencies.

Check out additional coverage of the meeting here.

Our region has been working on these issues, but can always do more. Over 20 years ago, the Water Forum Agreement was the catalyst for the formation of the Regional Water Authority and the Sacramento Groundwater Authority, which have helped ensure our groundwater basin can be healthy and ready for longer droughts. This conjunctive use effort will be key to our future.

Conservation Update and Local Reductions
The numbers are in! Last week, we learned how we are collectively doing on conserving water around the state. In July, consumers statewide reduced water use by 1.8 percent overall with the state’s North Coast region reaching the highest conservation levels at 16.7 percent, according to the State Water Board and news media reports. 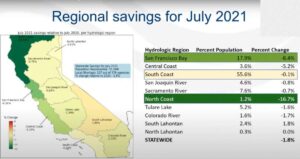 Locally, water use remained about the same in July but saw an encouraging trend downward in August, with a 6 percent decline in overall water use compared to the same period last year, according to the Regional Water Authority (RWA).

RWA is carefully tracking information for the region. Amy Talbot, RWA Water Efficiency Program Manager, says that there has been a 12 percent swing in the Sacramento region’s water use in the last three months. Compared to 2020, regional water use rose in June by 6 percent, leveled off in July, and then declined in August by 6 percent.

“This is exactly the use pattern we would expect to see once we declare a drought and start messaging,” she said.  “Drought response is not like a light switch—it takes time for the message to sink in, for customers to respond and for that response to show up in production data. We are anticipating increased reductions as the year progresses. We know that 6 percent isn’t 15 percent, but we are just getting started.”

In addition, recent reductions are on top of an overall 13 percent decline in regional water use since the 2015 drought and are occurring even during record-breaking summer heat when water use typically increases, she said. RWA recently prepared a fact sheet describing factors impacting the region’s water use in 2021. You can find it here.

Overall, remarks last week echoed what we have been learning over the past several months about the growing water and environmental emergency in the Sacramento region, across California, and the West and reinforces the Water Forum’s August resolution urging a 15 percent reduction in water use.

It is clear that our work is only beginning.